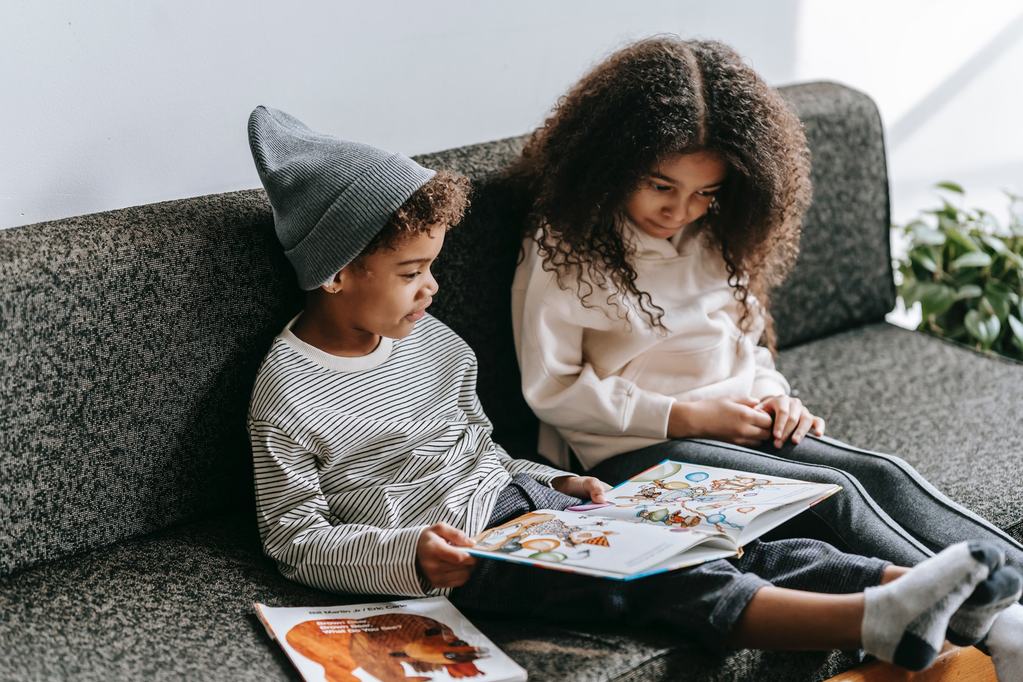 Going back to school after the summer holidays is a momentous occasion for children (and for parents!) The first few weeks are a time of possibility and change and can set the tone for the rest of the year. Back-to-school stories can help build excitement about the transition, explore the upcoming challenges and discoveries, and give reassurance that the coming year will be a great one.

Read on to discover 8 audio stories that get kids excited to return to the classroom.

“The Dot” will make your child feel inspired to go out and try new things!

This endearing story is about a young girl named Vashti who does not believe that she can draw. One day in art class, the teacher tells the class to simply make a mark and see where it goes. Vashti makes a dot and signs it. The next day she noticed that her teacher had framed her dot. Seeing her showcased drawing made her want to do better. Vashti continued to paint different versions until she had made dozens of dots in different colors and sizes. In the end, Vashti encourages another student to believe that she too can achieve anything she puts her mind to.

2. Sesame Street: S is for School

Perfect for kindergarteners – this story can help ease first-day jitters!

“S is for School!” tells the story of Elmo’s first day of school with his friends, including Abby, Big Bird, and other Sesame Street friends. The students are very diverse, and he meets people of Green, Fat Blue, and Large Lavender Live Hand descent, as well as monsters, birds, bears and superheros. Elmo meets a monster named Lola, who is looking lost and lonely. Elmo becomes her friend by offering her half of a cookie.

This story is about the value of helping others and can inspire your child with community service ideas for the school year.

Clifford has a big heart, but when he helps Emily and Tim do good deeds, things keep going awry. They begin by assisting a man to rake leaves and put them in his truck, but the leaves make Clifford sneeze. The leaves are blown away. Nothing seems to be working until Clifford sees a building on fire. He rescues two little kids and extinguishes the fire. In the end, the mayor rewards him with a big gold medal. This classic Clifford book invites everyone to do good deeds that make the world a better place.

4. A Bad Case of the Stripes

“A Bad Case of the Stripes” is an important reminder not to give in to peer pressure.

Camilla Cream loves lima beans, but she never eats them because the other kids at her school don’t like them. Camilla Cream is always worried about what other students think about her. On her first day of school, Camilla wakes up and finds herself covered in rainbow stripes. Nothing seems to fix it, as she breaks out in checkerboards pattern and bacteria tails. The doctors, specialists, and experts cannot figure out the cause of the stripes. Finally, an old lady forces her to eat some lima beans, which cures her condition. Even though her friends think she is strange, Camilla continues to eat lima beans and never has stripes again.

5. We Don’t Eat Our Classmates

“We Don’t Eat Our Classmates” encourages children to put themselves in others’ shoes.

The audiobook tells the story of Penelope – a young T-Rex who gets in trouble on her first day of school when she can’t resist the urge to eat the other students. After getting scolded for eating them, the teacher makes her spit out the children. Penelope doesn’t understand why she shouldn’t eat the other students until the class goldfish bites her finger.

After hearing this story, kids will feel eager to help others as they start the new school year – and make sure they are not making the situation worse!

In the book, Little Miss Helpful loves to help out, but sometimes she can be a little clumsy. When Mr. Tall’s shoelace gets untied, instead of tying up his laces, she ties his shoes together, causing him to fall and hurt himself. And when Mr. Happy gets sick, Little Miss Helpful tries to help him but ends up making him feel worse. This story from the iconic Mr. Men and Little Miss Series is bound to get you chuckling.

7. The Magic School Bus: Inside the Earth

“The Magic School Bus: Inside the Earth” will get kids eager to board the school bus for their first day and make them excited to learn about science.

The story is about Ms. Frizzle’s class adventure to collect rocks inside the Earth. The class goes out to a field and starts digging, where they learn about all the different layers: soil, sandstorm, shale, limestone, marble, and granite. As they travel to the Earth’s core, the students learn about fossils, stalagmites and stalactites, crust, melted rock, mantle, outer core, inner core, and volcanoes.

8. The Day the Crayons Quit

With this story, coloring will never be the same again!

“The Day the Crayons Quit” tells the tale of how Duncan takes out his crayons and finds a stack of letters inside. The reads about how the red crayon is used too much, complaining that too many things such as fire engines and strawberries are red. On the other hand, the purple crayon is a neat-minded soul and hates how Duncan’s colors go outside the lines. The black crayon complains that he only gets used for outlines. Saddest of all is the peach crayon – he has lost his wrapping and doesn’t want to be naked. Duncan draws a final drawing to please all the crayons.

P.S. you may want to get your child a Jooki to play these audiobooks on Spotify. To find out more, sign up for our newsletter.